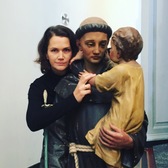 # 16. SULTAN'S SQUARE written after an explosion