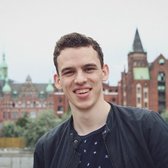 Hi all, I think we've all seen a lot of news surrounding the Ukraine invasion this week. Today I'd li