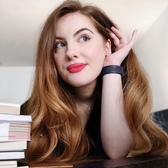 Here goes. My first newsletter on a weird but wonderful book I recently read. I'd appreciate any thou