touchdown! time to make a scene... 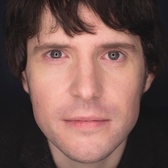 Hello there, It seems like 'making a scene at touchdown' was the theme of the week. First William Sha