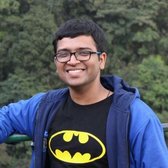 Long time no see! If you're following this, you might remember I've been dabbling in the (broken) hir