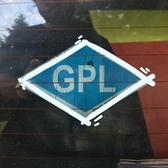 The creators of DOOM are driving Ferraris.