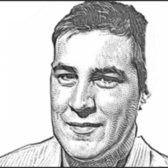 He makes professional-grade sketch comedy while operating in relative obscurity.