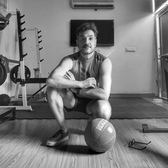 "Age is just a number. It's totally irrelevant unless, of course, you happen to be a bottle of wine"