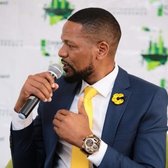 Industrialisation is often imagined as an influx of high polluting, heavy industry.But in this era of