The Value in Being Present and Living in the World 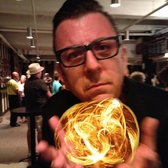