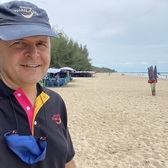 Welcome to my second ever newsletter! Last week, I sent out the letter to one person. That was me. Du