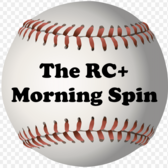 Welcome back to the MORNING SPIN! We hope you enjoyed the All-Star festivities and are ready for the