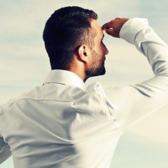 BlatheringIf you have ever been under general anesthesia, you experienced a kind of death – a death o