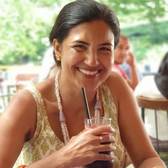 Stories from travel and psychiatry. There is nothing that teaches us more than human interaction. One