How to talk so people will talk: use their words and pronunciation... even when it's wrong 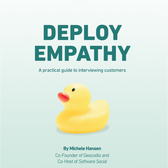 This was written as part of the rough draft for Deploy Empathy, a practical guide to interviewing cus