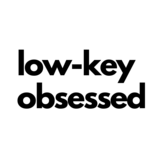 Some of my low-key obsessions are based on how incredibly, precisely relatable a thing is - for examp