This Is Why Dogecoin Is The Future 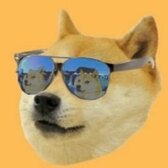 This week, Elon appeared on the popular Full Send podcast, where he extolled the virtues of Dogecoin