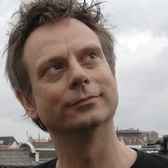 Hi all. You sometimes think that the moment has passed, and you missed the impact. I felt like one of