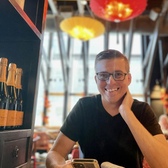 Hi folks - welcome to the December 2021 edition of Hotwiring Rails, now powered by Revue. This month