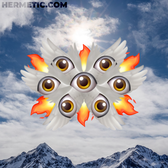 This week I got sample merch to check out, including an elaboration on the Anti-fascist Nuclear Disar