Smash Cut To: S2 E7 - The Art of Pop-Culture References 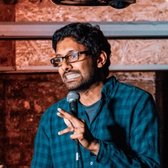 Hello! I’m Hari, and this is Smash Cut To, my weekly newsletter about my adventures in trying to beco