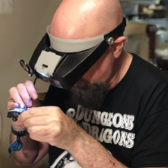 I want your input on this newsletter. How am I doing? What do you like? Don't like? What would you li