Chill Beats For Your Dog 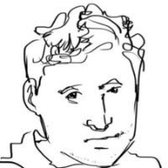 Or more specifically, my dog.