Beware the Injured Beast: Another Look at Putin's Psychology 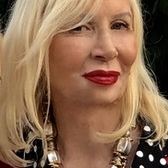 "[I]f anybody thinks that Putin wouldn’t use something that he’s got that is unusual and cruel, think