Impressions of America from an expat - Coté's Commonplace Book - Issue #67 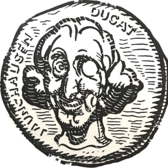 Notes on what it's like to be back, compare and contrast. Also, analysis of our recent kubernetes sur