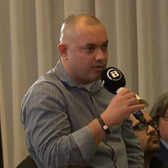 If you missed Bellator 275 here's a quick recap.