No-Code is Hitting an Inflection Point. Are You Ready? 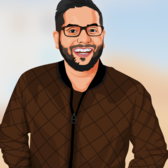 Here's a long-form article I co-authored on the state of the no-code that I thought you might enjoy.