Finishing my motion graphics editor, an API to generate animations, and more 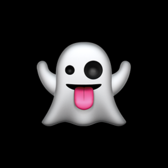