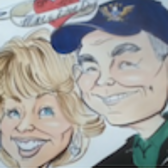 Presented IN ||| trilogimedia.com ||| “When you change the way you search things, the things you sear