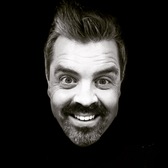 Hello, friends! It's "thinking Tuesday" again, so here's a piping hot newsletter. A long-ish essay to