Fortnightly Newsletter - Time to stop getting smashed on Facebook 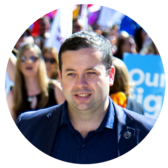 Welcome to my fortnightly newsletter on union campaigning, strategy and growth. Facebook is the new b