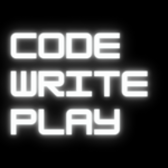 Greetings, game people. What a week to start a newsletter! I thought I was going to get to focus on r