Certain of the Unknown - Issue #71 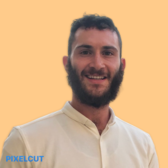 How do you respond to the unknown? Whether it be an upcoming event or experience, the unknown can evo