By Neil Garratt AM 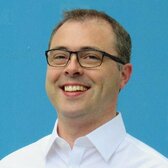 Hello, It's back to work with a vengeance over the last week, with the TfL funding deal finally agree