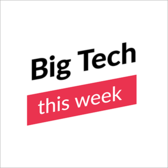 Top of mind: Happy Sunday! I'm forced to write about a man I'm tired of documenting this week. I'm a